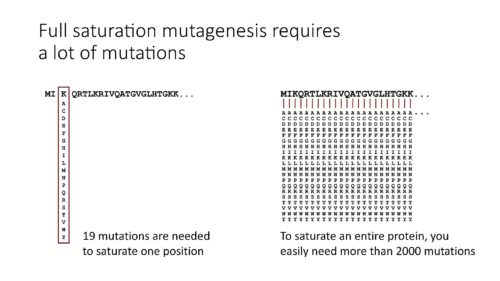 Picture it: You want to investigate your favorite biological phenomenon, and you start with a screening strategy that results in a number of significant hits. Congrats!

Next, you prioritize these hits and pick your favorite, a protein that is not well characterized. It is now your life's mission to fully characterize this protein. You know it is involved in the process you screened for, but how? Does this protein perform catalytic function? And if so, where is the catalytic site and which residues are involved?

To figure this out, you decide to randomly mutagenize the associated gene by PCR. But error-prone PCR is random, and you have no way to control which mutations you will introduce. The mutational space that is available to you is also quite limited, usually to one mutation per codon. For a lysine residue, for example, introducing only one point mutation makes it possible to change to six different amino acids, meaning that the other 13 are unavailable to test.

In an ideal world, you would systematically target your entire protein to be sure that you have tested all residues. You would replace every residue with all different amino acids, because some amino acid substitutions behave completely differently, for a full saturation mutagenesis on your protein. But that’s a lot of mutations: 19 to saturate just one position. For an entire protein, the number of mutations would be 19 times the length of your protein, meaning that even for short proteins, the number of mutations easily rises above 2,000.

It seems an incomprehensible exercise. But thanks to the high-throughput, CRISPR editing capabilities of the Onyx benchtop platform, which generates thousands of mutations in parallel, it is now within the realm of possibilities.

Liselot Dewachter, who has worked on studying antibiotic resistance in the labs of Prof. Jan Michiels at the University of Leuven, Belgium and Prof. Jan-Willem Veening at the University of Lausanne, Switzerland, put the Onyx to the test, choosing four proteins involved in synthesis of the E.coli cell envelope: LPXa, LPXc, MurA, FabZ.

As she explained in a recent Labroots webinar, she chose the proteins partly because they represent a mix of more and less well-characterized proteins, meaning there is information available in the literature that she could use to validate her findings. She also hoped to make some new discoveries about the cell envelope, which is a top antibiotic target.

“We urgently need new compounds to fight even the most resistant bacteria. And in this context, a lot of effort is being made into discovering inhibitors of mostly LPXa and LPxC. So we want to fully characterize these proteins and try to help this effort,” Dewachter said.

What did she find?

She was indeed able to generate saturation mutagenesis libraries and identify residues involved in catalysis of the LPXc protein and in substrate binding. But she also made some unexpected discoveries.

“I used to think of proteins as these molecular machines that were fine-tuned to perfection by millions of years of evolution, and that even the slightest change would lower the efficiency of this protein. But perhaps this was kind of a naive view.”

By plotting some of the information Dewachter gathered from the Onyx in a novel way, she was also to see this was not the case -- in as many as 40% of positions, the amino acid that was present could be replaced by any, or at least all but one, other amino acid.

“To me, this was quite surprising, and it highlights the high flexibility that any one position has in amino acid tolerance,” Dewachter said.

April 13, 2021
Video: Inscripta Customers Describe Their Experience with the Onyx Platform
By now you may have heard about our automated benchtop Onyx™ genome engineering platform — but have you seen it in action? Now that scientists…
Read More
April 7, 2021
Inside Inscripta: Katherine Krouse, Applications
When it comes to technology development, one of the most important elements is understanding how customers will use it. That’s why we rely on…
Read More
Back To Gallery

Contact Inscripta™ to meet the future with Digital Genome Engineering.