How much can we learn about biology by building a synthetic eukaryotic genome from scratch, one chromosome at a time?

An ambitious group of scientists is well on its way to finding out. Using the model organism Saccharomyces cerevisiae, the international Sc2.0 consortium is creating a yeast cell carrying 16 man-made chromosomes using novel techniques and advanced technologies.

“The genome-engineering tools and technologies currently being developed to produce the ultimate yeast genome will irreversibly connect the dots between our improved understanding of the fundamentals of a complex cell containing its DNA in a specialized nucleus and the application of bioengineered eukaryotes designed for advanced biomanufacturing of beneficial products,” authors Isak Pretorius (Macquarie University) and Jef Boeke (New York University) wrote in their 2018 paper describing the project.

The OnyxTM digital genome engineering platform is the latest tool in their arsenal, as described in a recent webinar by Inscripta scientist Bryan Leland. 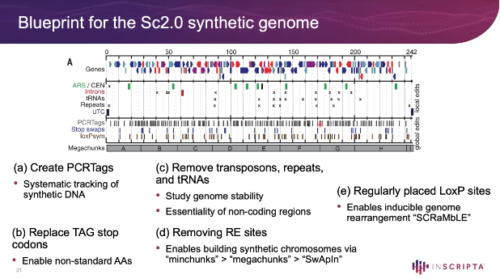 After designing each chromosome, Sc2.0 scientists check that the synthetic version resembles wild-type yeast as closely as possible when grown under a variety of conditions. If the growth of the synthetic yeast is slower than wild type, a “de-bugging” process begins. A single site in the genome is reverted from the synthetic sequence to the wild type sequence to make a new draft, and the phenotype is assessed. If that doesn’t improve the growth, then the process is done iteratively, over and over and over, until finally a change that restores growth is found.

Through this time-consuming process, Mitchell was able to identify four causal mutations in two genes (MOB2 and PRE4) of syn6 that restored wild type growth when reverted back. 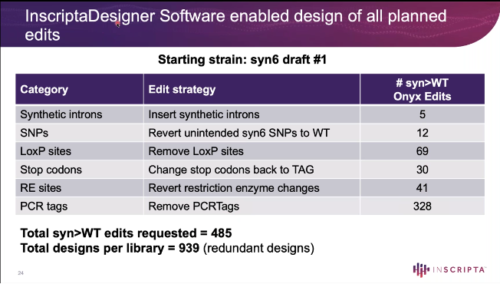 The question arose: Could there be an easier way? The answer that emerged: Yes, via the Onyx platform.

Using the starting strain with the first draft of syn6, Inscripta scientists worked with the Boeke Lab to design hundreds of edits in the InscriptaDesignerTM software. Including redundant designs for each edit, the library included 939 designs, and tests began to see which of the edits would restore wild type growth.

The scientists ran competitive growth selections in enriched media, and the barcoding built into the Onyx system made it easy to track enrichment and depletion of individual designs in the library.

“This whole process only had about two and a half days of hands-on lab time,” Leland said.

Using the InscriptaResolverTM software, the scientists tracked barcode counts at time point 0, and then time point 24 hrs. They were then able to detect which designs had significantly improved growth, computing fold-change and p-values for each of the 939 designs.

The top performing edits included all four of the mutations that had been identified by Mitchell.

“We also pulled out a number of other designs that enriched,” Leland said. “so there’s a possibility that these other designs are also slightly impacting the synthetic chromosome and that could be investigated further by doing targeted studies looking at these individual changes.”

What was once a time-consuming manual process was conducted in a single experiment on the Onyx platform. And the platform could also be used at an earlier stage, to pre-screen changes to see where problems might arise before beginning the building process, Leland said.

“Sc2.0 is a really cool project and it was really fun to be a small part of it,” he added.

Leland also shared the results of another collaboration to improve S. cerevisiae growth on glycerol with the lab of Michael Brent at Washington University in St. Louis.

“This is an example of using the Onyx platform for high-throughput hypothesis generation, where we can rapidly genotype 40,000 different edits in a single experiment,” Leland said.

If the growth of budding yeast on glycerol could be improved, it could be useful as a cheap carbon source for bioindustrial production, Leland explained.

After designing the edits, they put the cells through a competitive growth selection over several generations, with triplicate flasks within each treatment condition, measuring counts via the Onyx built-in barcoding system. 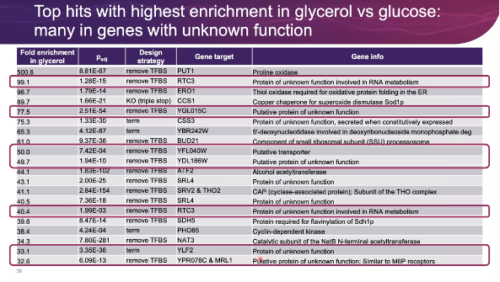 The 40,000 designs across seven libraries, in two media conditions, with three replicates per condition, measured at three timepoints, led to a lot of data: over 720,000 data points, to be exact, Leland said.

Luckily, the OnyxResolver software helped make sense of the data, and the team was able to identify 1,774 edits that resulted in strong depletion of glycerol, and 970 that enriched in glycerol across all libraries.

These results not only reproduced known glycerol growth phenotypes, but also identified many promising results with high enrichment in glycerol versus glucose in genes of unknown function.

"That highlights a real advantage of when you take this unbiased genome-wide approach; you're going to find beneficial diversity in places that you maybe would not have expected to look based on prior knowledge of the pathway," Leland said.

To learn more about how the Onyx platform was used in both of these projects, check out the full presentation.

January 19, 2021
Onyx Platform Helps Synthetic Cannabis Company Create Its First Commercial Product
You may have heard of the cannabis compounds THC and CBD, but did you know there are more than 100 cannabinoids, many of which could have…
Read More
January 5, 2021
Inside Inscripta: Nandini Krishnamurthy, Applications
When we developed the Onyx™ Digital Genome Engineering platform, we decided to offer it first to customers for microbial applications while we…
Read More
Back To Gallery