Improving Protein Production in Yeast with Targeted and Exploratory Approaches

Recombinant proteins have many applications, from enzymes and protein therapeutics to meat and materials alternatives, and there is significant interest in trying to maximize the productivity of protein expressing strains. In a recent webinar, Eric Abbate, Inscripta’s Director of Analytical Biochemistry and Applications Development, showed how the Onyx platform can be used to improve heterologous protein production in S. cerevisiae.

In the webinar, Abbate explained how he used the OnyxTM workflow to engineer S. cerevisiae to optimize production of cellobiohydrolase I (CBH1), an enzyme involved in cellulose degradation.

Screening using both library types yielded several hits where the strains showed significantly improved CBH1 production compared to the base strain, up to a 1.65-fold improvement from various edit types.

In total, Abbate generated just under 15,000 edits and screened nearly 8,500 isolates for this experiment. This resulted in more than 70 unique hits. The greatest number of hits came from a shallowly screened library, which is why Inscripta recommends shallow screening of many libraries rather than deeply screening just a few when phenotyping capacity is constrained.

Abbate noted that the hits affect different genomic functions, from protein degradation and protein trafficking to transcription, translation, nuclear signaling and glycosylation pathways. Some of these hits were in genes that Abbate said would likely have been missed had he not cast a wide net with the untargeted, genome-wide edits.

These results demonstrate how a combination of informed and exploratory edits enable rapid improvement of strain productivity. What is more, these beneficial edits could be potentially combined for even greater increase in protein production. To learn about the different libraries we tested and gain insights into the mechanisms behind improved production, you can watch the highlights below and listen to the full webinar. 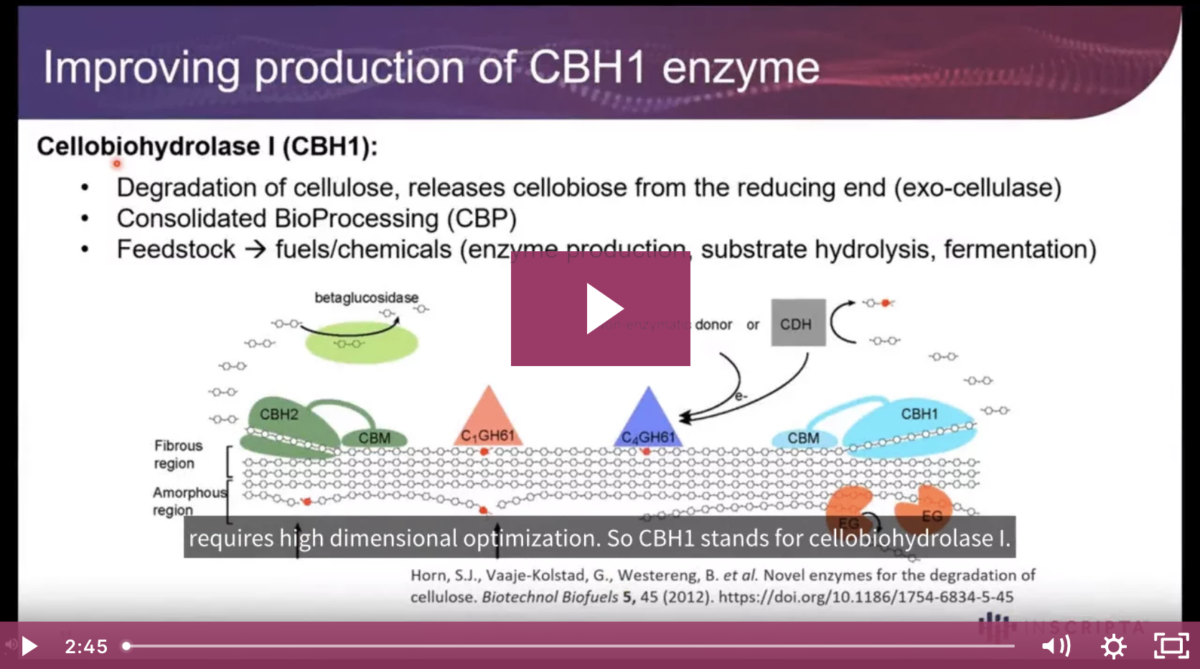 September 28, 2021
Inscripta Technology Helps Scientists Find Targets of Osmotic Stress Tolerance in the E. coli Genome
Scientists have studied osmotic stress in different contexts for many years to understand topics such as how climate change can affect both…
Read More
September 21, 2021
Review of recent achievements in engineering microbial production systems
At Inscripta, we keep our hand on the pulse of recent developments and trends in genome engineering technologies. A recent review article by…
Read More
Back To Gallery